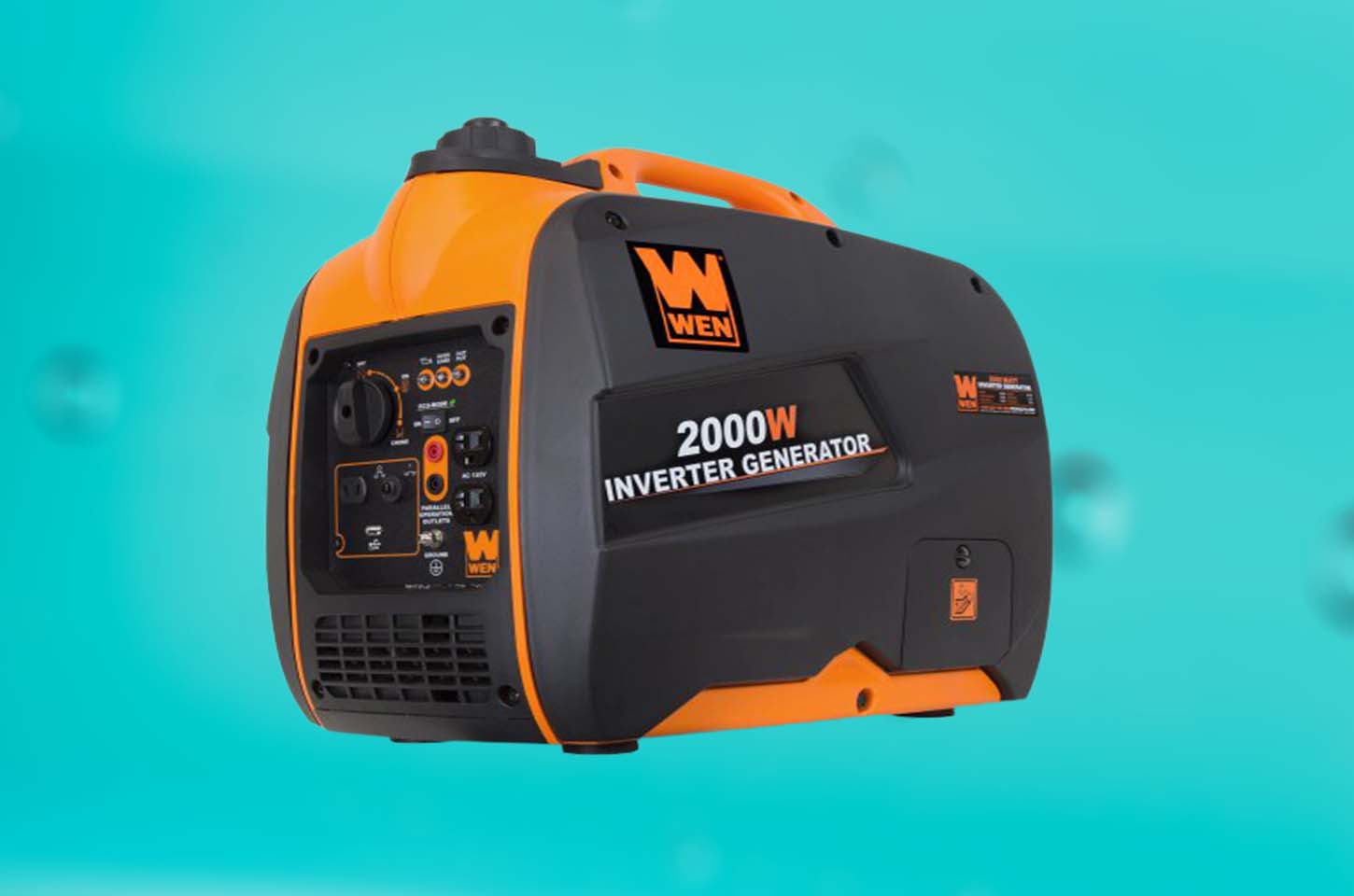 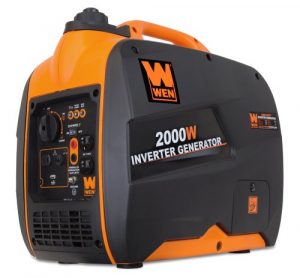 The WEN 56200i 2000 watt is an inverter generator with average power output, which is sufficient to run all essential appliances in your home.

This will warm your home during the power outage. So, this could be the best option if you prefer the generator to operate few appliances in your home.

Not just that, it can be a great option for camping, tailgating, and much more due to its portability. Since this is an inverter generator, it delivers more reliable power, allowing you to run even sensitive appliances such as mobile phones, laptops, television, and more.

This is a simple, compact, amazing design, a combination of black and orange color, making it look fabulous. This can be parallel compatible can connect to other similar generators for double the power.

Are you a hunter? Then, the WEN 56200i 2000-watt inverter generator is one of the best choices as it is easy to carry and delivers impressive power output to run the appliances that you want to activate during your hunting.

We’ve done deep research on the WEN 56200i to review about it. Please read this article to know more about it.

TheWEN 56200i 2000 inverter generator is meant for low total harmonic distortion (THD) and thus safe for all-electric appliances, including sensitive devices such as laptops, cameras, mobile phones, and more.

This is one of the quieter generators on the market today with its sound-canceling design and mufflers, making many buyers look forward to buying.

When it comes to fuel efficiency, it has a small fuel tank of 1 gallon, which is decent than its competitors. The fortunate thing is it delivers an excellent running time even with its average fuel capacity.

As discussed, it is a relatively quiet inverter generator that makes low noise than others with similar features on the market.

The WEN 56200i 2000-watt generator is powered by a small 4-stroke 79.7 cc engine, which is full enough to run multiple appliances simultaneously.

When speaking about the fuel type, it runs on gasoline, which you can get easily anywhere and thus make the generator one of the best inverter generators.

The interesting fact about the unit is its engine and emissions. The engine is designed to deliver clean and constant power, so thus it won’t damage your electrical appliances at any cost.

This has both EPA III and CARB compliant, so you can use this wherever you want to. There is an eco-mode to improve the fuel efficiency, which is capable of adjusting the engine speed automatically, depending on the load connected to it.

Not just that, it is also the reason behind the quieter operation. This is why your generator runs quietly. This makes the generator energy-efficient and quieter.

The power output of the WEN 2000-watt generator is 1600 watts running and 2000 watts surge power, which is standard for inverter generators. This can be fitted with two 3-prong 120-volt AC outlets, one 12-volt DC outlet, and one 5-volt USB port, allowing operate multi appliances at once.

As discussed, this is safe for all electronic devices due to its low level of THC, which is only 1.2% at a full load.

When it comes to the noise level, it only noises at 55 dB at 75% load and only 51 dB at a half load. However, both are quieter when compared to portable generators. It sounds less than a few conversations of few people, thus make you comfortable when using it in public places.

It is compact and comes in handy, measuring only 18 x 11 x 18 inches overall, including a sturdy carrying handle. The constructed materials make it lightweight. With its weight of 48 pounds, you can carry this effortlessly wherever you want.

It is user-friendly and travel-friendly, thanks to its simple control panel and folding handles. On the control panel, you can monitor the fuel level and loading status.

The WEN 56200i has also featured an automatic low oil shutdown, which turns off the engine automatically when it reaches a low fuel level. Apart from that, it also comes with electric overload protection to prevent engine damage from overloading.

It features a recoil system to start the engine, and the rest of the operations are quite easy with its intuitive control panel, which comes with an on/off/choke turning knob to make the process easier for you.

One of the best aspects of the generators is it is incomparable inverter generator comes at an affordable price. This is super-efficient quiet generator makes it quieter with a rated 51 decibels at a 1.4 load.

We are also impressed with how lightweight it is; it weighs only 48 pounds, making it carry anywhere, an excellent option for camping, tailgating, etc.

The WEN 56200i delivers clean and stable energy, which is safe for all electrical appliances, even sensitive devices. With its multi outlets, you can operate more appliances at the same time! A USB port is one among them. The three different outlets are one 12 volt DC outlet, two 120 volt AC outlets, and a 5 volt USB port, which is more enough for running several electronic appliances, making it ideal for recreational use.

This is one of the best alternatives to electric power. This will be useful and helpful during a power outage. With the low level of THC, it is one of the safest generators on the market.

We also like its features of eco mode, which makes the unit more fuel-efficient and energy-efficient. And aids for the long run of the WEN 2000 generator.

One of the drawbacks of the WEN 56200i 2000 generator is its less warranty. It only comes with two years warranty, which is comparatively less than other brand generators with a similar feature.

Another difficulty is refueling, which can be a challenging task to do it neatly. It is because of the small fuel cap, so you should use a funnel for refueling. With that, you can avoid spilling gasoline outside.

The more important thing is you are advised to check the damage after removed the package. Some generator’s packages are somewhat poor. So, you have to check whether the unit is in good condition. If you notice any damages in the unit, immediately go for exchange.

Apart from that, cleaning the fuel and draining the tank can be a daunting task for small generators. However, you have to do it to make the unit perform well.

Since it is a quiet generator, you don’t worry about the noise level anymore! It won’t disturb your neighbors on a camping trip as well. You can use this anywhere in the US since it is EPA III and CARB compliant.

However, it is not that quite good for residential use as it doesn’t have enough power output to run home essentials simultaneously. Instead! This can be a perfect option for recreational use where it performs well. Apart from that, you can also use this for camping or fishing. You are also advised to check the unit after removing the package.

The WEN 56200i 2000 watts is an excellent option for what you pay for. And it delivers the result more than we expected and for its price.

This is not a heavy-duty generator, suitable for intensive use. There is a low oil indicator that indicates the oil level when it reaches a low oil level. By doing so, it protects the engine from drying fuel and from various damages.

Overall, the WEN 56200i 2000-watt inverter generator is unbeatable in terms of performance and reliability for its price.