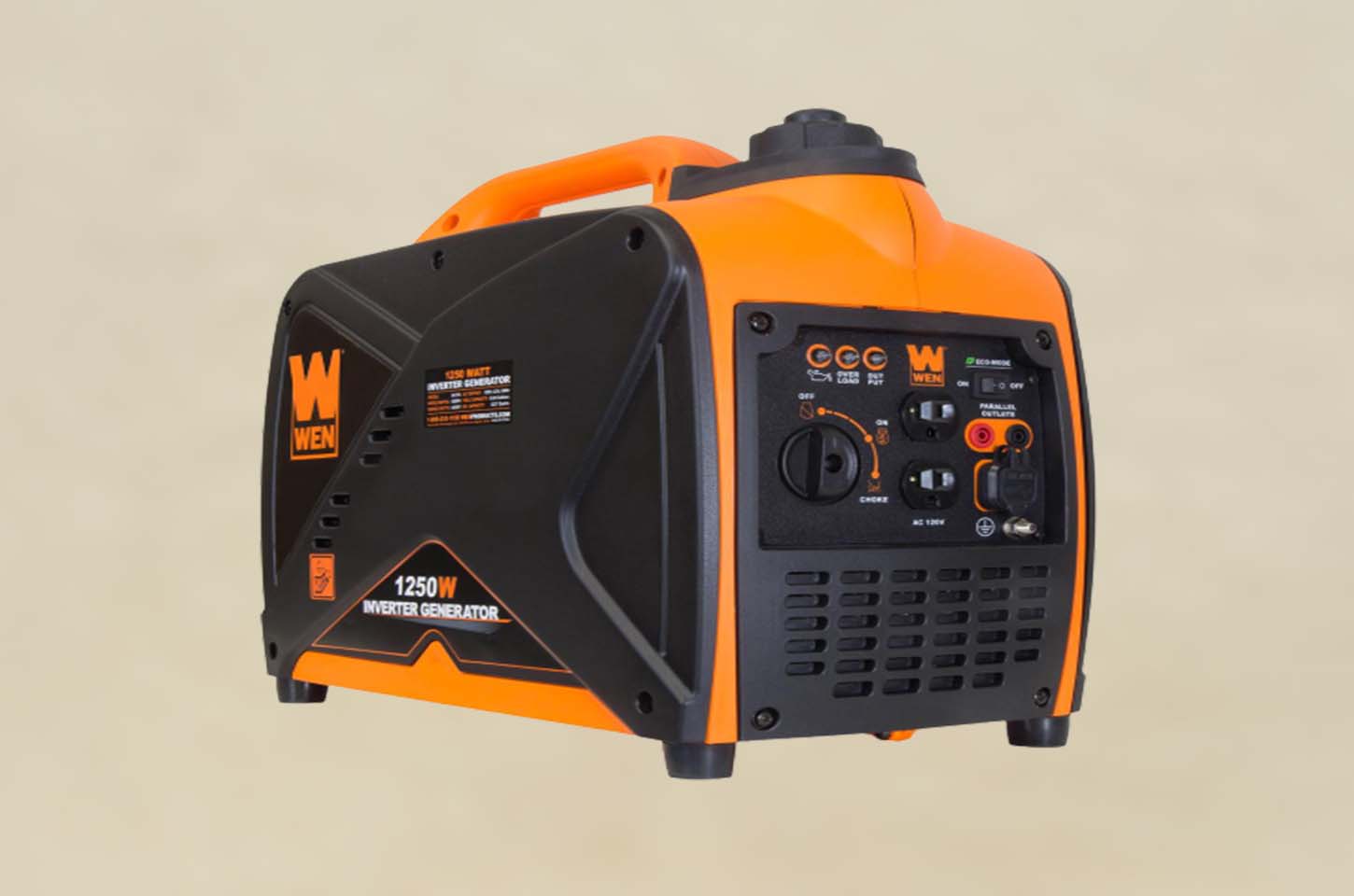 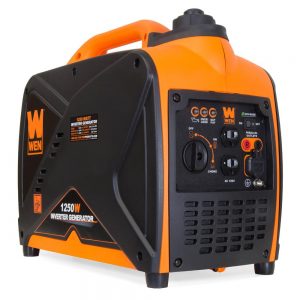 Inverters are quieter generators and are portable. They are easy to carry and transfer from place to place effortlessly. Most importantly, they are user friendly and eco-friendly. Many inverter generators have inverter technology to produce reliable and clean power to run the connected appliances safe and secure. There are several options out there when it comes to inverter generators. Selecting the best one might be a daunting task for you. We are here to help you find the best brand of inverter generator on the market. Not all the inverters are the same and may from their features, quality, performance, price and many more.

On this page, we are reviewing one of the top-rated inverter generators, the WEN 56125i 1250-watt inverter generator. This is capable of running multi electric devices at once. It comes with an average output of 1250 watts that is enough to run all essential appliances in your home, camping or job sites, including lights, fans, television, mobile phones and more. They will keep your home warm during a power failure. The WEN 56125i generator might be the one for you if you want a generator to run a few appliances in your home.

This comes in handy with its folding handles, making it more manageable and portable. The inverter generators from WEN produces more reliable power, so the WEN 1250-watt inverter generator is no exception. Why we’ve selected it as the best inverter generator is it is pretty quiet and offers outstanding performance. We’ve done deep research on the WEN 56125i generator to review it, and it has good ratings and reviews from the customers and experts as well. Read the entire article for more information.

The WEN 1250-watt generator is simple, compact, lightweight, and amazingly portable. A combination of black and orange color makes it look more fabulous. The notable feature of the series is it is parallel compatible, letting you connect two similar generators together for double the power at the time of emergencies. In this way, you can have the power of 2500 surge watts. It is considered as one of the best inverter generators on the market today. This could be a great choice for your home to keep your essential electric devices active during a power out. Not just that, its portability makes it ideal for camping, outdoor events, tailgating, etc.

The power output of the WEN 1250-watt generator is 1250 surge watts and 1000 running watts, which is the average output of the inverter generator. It can be fitted with two three-prong 120-volt receptacles and two 5V USB ports. It lets you operate multi electrical devices at once. The produced power by the engine is completely safe for all electronic devices, including sensitive devices such as mobile phones, television, tablets, etc.

The notable feature of the series is unit is its engine and emissions. The WEN 56125i 1250-watt inverter generator is powered by a 60cc four-stroke OHV engine that can simultaneously run small power essential appliances. Since it has inverter technology, it guarantees that it will always produce clean and stable power. That’s way, it ensures your sensitive electrical appliances safety. The powerful engine enhances its performance. Moreover, the engine is powered by WEN, so you don’t have to worry about its quality and durability.

As the name implies, the 56125i 1250-watt gas-powered inverter generator uses gasoline for the operation. Gasoline is easily available anywhere and doesn’t produce fume much. This makes it eco-friendly and one of the best inverter generators worldwide. With a 0.7-gallon fuel capacity, it offers a run time of 5 hours at half rated load. In order to increase the run time, disconnect a few appliances and minimize the load as a quarter. That’s way, you can extend the running time of the unit. If you are using it while camping, just simply connects the devices that are essential to be operated for a more extended operation.

It is simply called THD, which is an important factor when it comes to generators. In general, the inverter generators are designed with a THD level of less than 3% to clean and constant power. The inverters with less THD don’t damage the electrical appliances at any cost. In this case, the WEN 56125i generator has less THD level of 1.2%, which means it runs your power tools with safe and secure.

Noise level is another crucial factor. But you don’t have to worry about it when you decide to buy an inverter generator. The WEN 1250W generator runs the appliances at 51 decibels at a quarter, which is a decent sound of inverters. It is calculated 22 feet away from the generator according to standard conditions. Moreover, it is EPA approved and has CARB III compliant. It means you can use the generators all over 50 states, including California. This is a quieter generator compared to other inverter generators. It sounds likely to the conversation of few people, thus making it an ideal for camping, outdoors, indoors and public places.

The WEN 1250-watt inverter generator features an eco-mode throttle, making it a fuel-efficient one and running the unit quieter. This can automatically adjust the engine speed, depending on the load, and ensure it doesn’t exceed the overload. There is a low oil shut off, which shuts the engine automatically when low oil is detected in your generator. This way, it protects the motor and extends its lifespan. Plus, it comes with an electric circuit breaker to prevent engine damage from overloading.

There is a control panel in front of the generator. It lets you track or monitor various generators’ operations, including fuel level, number of connected appliances, power output, operational hours, etc. With this data, you can schedule the generator’s maintenance accordingly. It has a recoil mechanism to start the engine, and the rest of the operations are pretty easy with its intuitive control panel. On the panel, you can find an on/off/choke turning knob to make the operational process simple and easy.

On the other hand, it features a carrying handle to make transport easier. Simply one person can carry and transfer the unit wherever you go. Moreover, it is lightweight with 31.6 Ibs and a dimension of 17 x 9 x 16.5 (L x H x W). It comes with a warranty of two years. 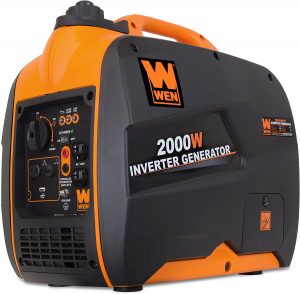 The WEN 56200i 2000 is meant for camping, RVs, outdoors and tailgating, thanks to its low total harmonic distortion (THD) of 1.2%. This is safe for all-electric appliances, including sensitive devices such as laptops, cameras, mobile phones, and more. There are USB ports to run personal devices like tablets, mobiles, etc. This inverter generator falls in the category of 2000 watts, which can run multi appliances at once. This is considered as one of the quieter generators on the market today, thanks to its sound-cancelling design and mufflers.

The WEN 2000-watt generator has gained many customers in a short period. Moreover, it has excellent fuel efficiency even with its small fuel tank of 1 gallon. This size is decent than its competitors. And it offers an excellent run time with its small fuel tank. Overall, the WEN 56200i 2000 inverter generator is relatively quiet, which is comparatively better than similar inverters on the market.

Finally, the WEN 56125i 1250-watt inverter generator is a great choice for someone who is looking for an inverter generator at an affordable price. It is a super quiet generator, and there is no need to worry about its noise level. Hence, it doesn’t disturb you and your neighbors as well. This could be a perfect choice for camping and outdoor events but is not one for homes. You’ll get features that you pay for. But it delivers the result more than you expected for its price. Since it is lightweight, it is suitable for intensive use. Overall, the WEN 56125i inverter is unbeatable in terms of performance and quality.