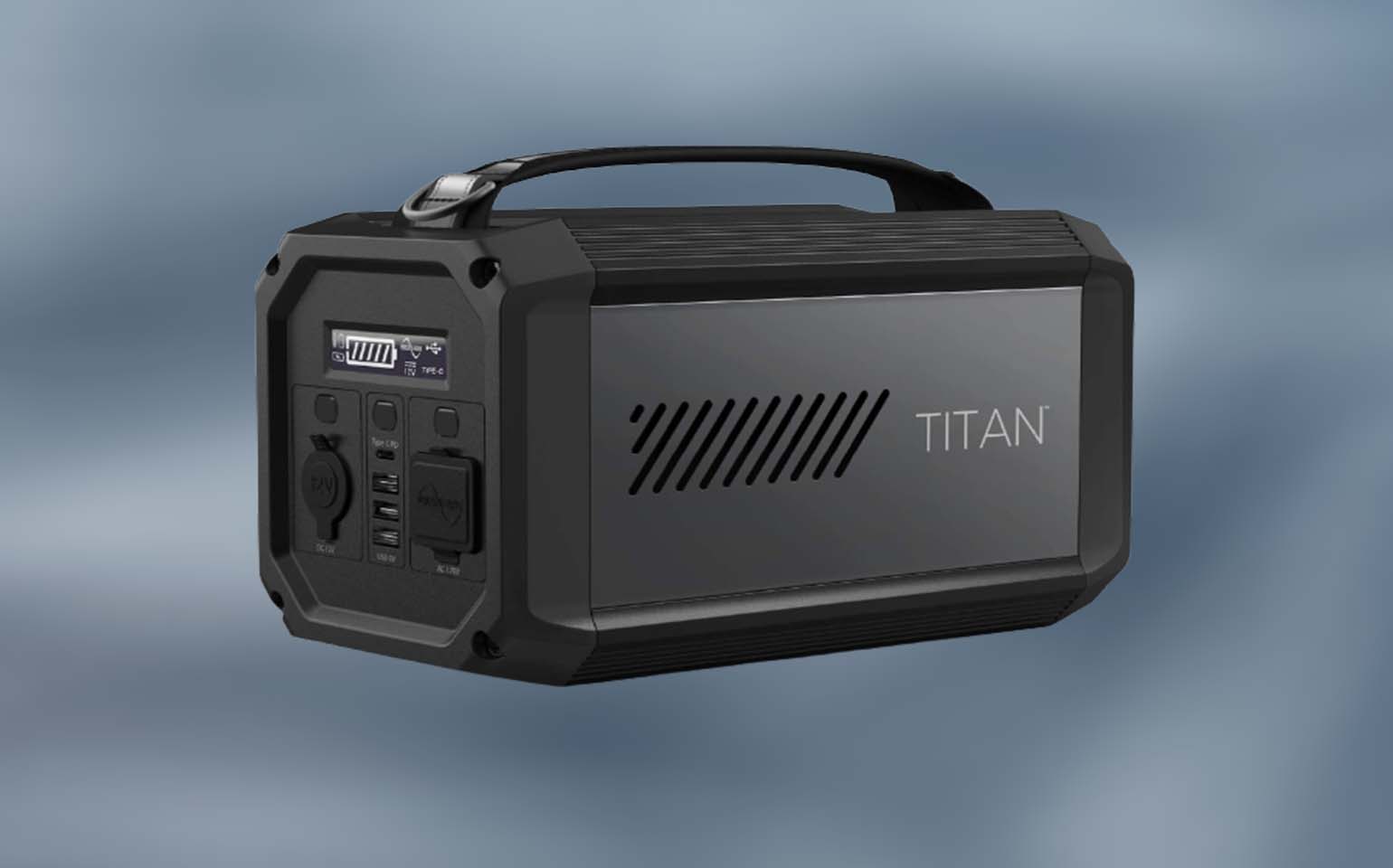 Why do we choose Titan solar generators?

If you are looking for a solar generator that can keep your essential items active by supplying continuous solar energy, then Titan Solar generator is a good choice. The generator takes four hours to get fully charged using Solar energy. It has an AC outlet, a DC outlet, and a 24V battery. It gives a number of options for charging. You can utilize the inputs for charging the electronic dives in parallel.

The key feature of the Titan solar generators is the lithium-ion batteries. To increase the battery capacity, you can stack the lithium batteries one over the other. As per industrial standards, the maximum limit for stacking lithium-ion batteries is “six.” In fact, this solar generator is named “Titan” since it has a very large battery capacity. The control panel consists of two 2000W solar panel inputs, two AC inputs, one car cigarette lighter DC power input, one RV 30-amp outlet, six USB ports, etc. In addition to this, lithium-ion batteries can offer a running watt of 2200W. With a 3000W inverter and six 110V AC outlets, you can supply power to very large appliances like refrigerators, air coolers, etc. With these many advantages, Titan always stands out from the crowd. In this article, we will discuss Titan solar generators and reasons to prefer it first among other solar generators.

Why do we choose Titan solar generators?

There are plenty of reasons why we choose Titan solar generators. Let us discuss one by one.

Removable and expandable batteries-As far as Titan solar generators are concerned, they are very portable and flexible. You can expand the battery capacity by stacking more lithium-ions. In a similar way, you can also replace the old one with the new one very easily. It is very easy to carry all the other components when batteries are isolated.

High power of 2000W lithium-ion battery- Titan solar generator is the only generator that has the highest output of 2000W. In simple words, the output is double when compared to counterparts. Moreover, the lifespan of this generator is about ten years, which is pretty good.

3000W pure sine wave inverter- It is the largest inverter that can perform with 92% of efficiency and draws only 5 watts while operating in the no-load condition. Generally, you can attain more power using large inverters.

Quality key components-In Titan solar generators, the key components are made of high quality to ensure long-lasting performance. Generally, solar generators are cheap generators. If you use low-quality microcontrollers, it will be very difficult to step down the voltage when you require high power. Most of the generators allow only 30.-50 volts. In contrast, Titan generators will step the voltage down to 145 volts. Thus, the solar wires carry low amperes to make them much more efficient. So, it is extremely safe to touch these solar wires.

This is one of the most versatile and powerful solar generators available in today’s market. It features a 3000W pure sine wave inverter that can offer a rated watt of 3000W. It can also reach up to a peak watt of 6000W. Lithium-ion batteries are the highlight of this generator. You can add more lithium-ion batteries to increase the battery capacity.

As the name suggests, you gain solar energy from a universal energy source ‘Sun”. Generally, there is a misconception that these generators are efficient enough to generate power on a sunny day. In reality, you can make use of an AC charge port to charge the essentials during a rainy day.

Titan solar generators are extremely safe to use with MPPT charge controllers. I never compromise on its performance, even during bad weather conditions. Due to stackable lithium-ion batteries, it is heavy in size. Although it is hardly portable, the generator will deliver tremendous performance. It is totally worth buying.

Basically, we require AC current to run electronic devices. But these solar panels produce DC current. At that time, we need an inverter to convert DC to AC power. Thus, Titan solar generator features a 3000W pure sine wave inverter to run all the essential electronic appliances. This inverter can supply a continuous watt of 3000W and a peak watt of 6000W. The generated power is more than enough to run many appliances ranging from lights to heavy load appliances like microwave ovens, refrigerators, Televisions, etc.

A 3000W pure sine wave inverter is very powerful that rarely comes in other similar-sized solar generators. It carries a large battery capacity so that you can connect many appliances during a blackout day.

A key point to note here is, Solar generators can operate even without charging batteries. You can directly use solar power to run the essential electrical appliances. But you can supply solar power to the appliances only during day time.

Titan Solar generator comes with a large 2000W lithium-ion battery. You can store plenty of power using this battery and use it as an emergency power backup source. So, you can run a wide range of power appliances simultaneously.

You can take a fully charged solar generator for camping. Since these batteries are removable, you can make this generator even more portable by stacking a limited number of lithium-ion batteries. However, you can increase the battery capacity by connecting another battery via an external battery port.

It consists of plenty of input ports to connect the electrical devices. You can use an AC wall charger and a car charger to charge this unit. The AC wall charger takes less time to charge the unit. It takes merely three hours to get completely charged. Put the car charger as a last option since it is the slowest charging mode. This system can offer rapid voltages. So, you can charge your devices within a short period using this solar generator.

In every solar generator, charge controllers are an important factor. It safeguards the generator from short circuits and reverse polarity. Plus, it ensures whether the produced power is safe to run sensitive electronic devices without causing any damage.

Titan Solar generator comes with two MPPT charge controllers. It monitors the voltage flowing through both input and output. In addition to this, it prevents excessive power drawings from the input AC and DC source.

This generator is designed with proper ventilation. Thus, the unit remains cool even when the engine is operating at full load. The installation is flexible, and the modular design allows you to stack a number of lithium batteries without any issue.

Titan solar generator is a lifetime investment. This generator is expected to deliver stellar performance for a long period.

A product’s pricing is based on several factors like performance, lifespan, maximum power output, etc. Although Titan solar generator is expensive, it perfectly balances the price and the high-end features.

The two important factors that decide portability are size and weight. Lightweight generators are easy to carry. With a weight of 66 pounds, you cannot expect portability in Titan solar generators.

You can extend the battery capacity by stacking more lithium-ion batteries. So, it is an added advantage if you want extra power to run heavy-load appliances. Titan solar generator is capable of delivering a peak watt of 6000W. Moreover, you can increase the power capacity using the expandability feature. Note, only specific modern solar generators have this feature.

Using a solar generator has many advantages. You can use these generators as an emergency backup source to run the essential electrical appliances. You can see extended periods of power cuts in disaster-prone areas. So, you need plenty of output power to fight against a blackout day. Very importantly, you need to supply clean power to emergency devices like mobile phones to prevent any damage. In the Titan solar generator, the pure sine wave inverter ensures the produced power has the least THD (Total Harmonic Distortion). Thus, you can prevent voltage fluctuations. Although it is heavy, the user-friendly features rise up the graph of these generators.

I am an electrical engineer, and I have complete knowledge in power equipment like generators, transformers, and cables. I can design the complete electrical grid. I also love to work with Generators, and I maintain this website where we provide better insights on the best Generators in the market.